Today I’ve decided to do something different. I’m participating in a Read-a-Thon! I found out about the Read-a-Thon being this Saturday on the #newbloggers group on Discord and knew that I had to join in. I haven’t done a Read-a-Thon in so long and I’m so excited to join in.You can find the full details here. 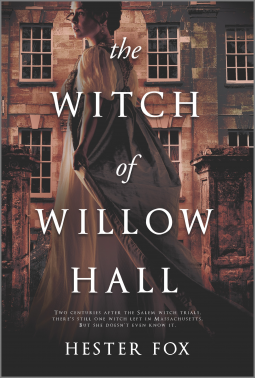 Two centuries after the Salem witch trials, there’s still one witch left in Massachusetts. But she doesn’t even know it.

Take this as a warning: if you are not able or willing to control yourself, it will not only be you who suffers the consequences but those around you, as well.

In the wake of a scandal, the Montrose family and their three daughters—Catherine, Lydia, and Emeline—flee Boston for their new country home, Willow Hall. The estate seems sleepy and idyllic. But a subtle menace creeps into the atmosphere, remnants of a dark history that call to Lydia, and to the youngest, Emeline.

All three daughters will be irrevocably changed by what follows, but none more than Lydia, who must draw on a power she never knew she possessed if she wants to protect those she loves. For Willow Hall’s secrets will rise, in the end…

I have a review copy of this for a blog tour and have already started it. Depending on how much I’ve read today,I’ll finish this tomorrow. I might even finish it before as the readathon starts at 1pm my time.

Throne of Glass follows Celaena Sardothien, an 18-year-old assassin in the kingdom of Adarlan. After being imprisoned for a year by the king, she accepts his son’s offer to compete with other assassins and thieves for a chance to serve as the king’s champion, after four years of which, she would be granted freedom. This leads her to form unexpected bonds with Chaol, the captain of the guard, and Dorian, the crown prince of Adarlan. Over time, Celaena is drawn into a conspiracy and a series of battles, leading to discoveries surrounding both the kingdom and herself..

The final book in this series comes out on Tuesday and I really need to finish my reread. I just have Tower of Dawn left and I’m hoping to get a good chunk of it read tomorrow!

I’m hoping I don’t get too distracted and get a good amount of reading done. As I’m posting this,hopefully it’ll motivate me even more.

Are you participating?What books are you planning to read?